It's a new year and things are bound to change. Over the past few months, I've been working towards migrating this blog to my new professional website, amandacorlies.com. I've been wondering what I should post as my last official blog here at this sight. It felt like I needed something worthy, since I've been posting for over five years.

When a friend sent me a lovely video from the NC Zoo about their gorilla program, the births of their two youngsters last year, the loss of their silverback, Nick, and the outreach conservation programs they are a part of in Africa, I realized I'd found my final blog. (Thanks Friend!) It was good to see some old friends and meet some new ones smiling out of the camera at me, both human and otherwise.

So, here you have it folks. My final blog  here at the Keeper of the Zoo site. For those wonderful and faithful readers who have been following me here, don't fret, the blogging will continue over at Amanda Corlies, and links to this archive will remain very much alive. So, come on over to my new location, after you've watched the video, of course. Happy 2014! May the changes in your lives make them richer and fill you with joy!

Thought you might like to see the photos of Patches, the NC Zoo's new polar bear exploring her new home. She arrived at the zoo on Wednesday evening. No word yet on when the exhibit will reopen to the public. They will allow Patches some time to settle in first. So here are some photos to tide you over. And don't forget to stop by The Ravens Crossing today for some YA fiction fun with Wildwood Tides, my latest story. There are lions and tigers and bears in the story, even. Well, no bears yet, but they will make an appearance. I bet you people are not surprised. Have a fantastic day. You can find the beginning of this season at by clicking here. 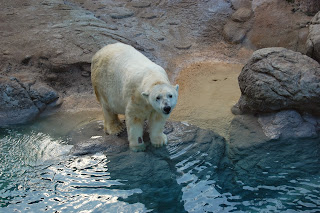 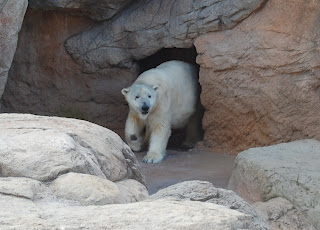 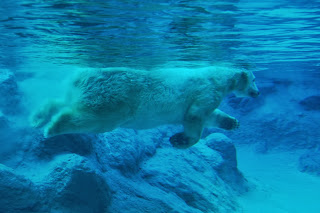 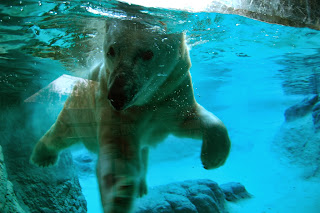 Posted by Zooleft at 7:13 AM No comments: 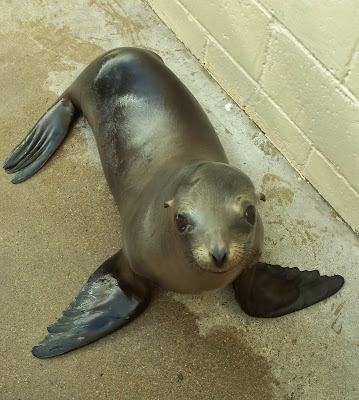 My friends at The North Carolina Zoo sent me this fab photo of Dyson, one of two young rescued California sea lions the zoo took in last Thursday. The pups were rescued by Sea World of San Diego after being abandoned or losing their mothers. The two arrived without incident and I'm told are resting comfortably at the Zoo's Rocky Coast holding area for their required thirty day quarantine. “Storm,” the female, and “Dyson,” the male, are estimated to be sixteen months old and were both found stranded on La Jolla Beach near San Diego in June 2012.

Sea World of San Diego, has saved more than 400 marine mammals over the past year--an average of 12 per day. Most of the animals are rehabilitated and returned to the wild. But a few, like Storm and Dyson, cannot be released for various reasons. These animals are owned by the National Marine Fisheries Service and, when possible, are placed on loan to accredited U.S. zoos and aquariums. I can tell you honestly, though it's sad they can't be released back into the wild, Dyson and Storm have found a good home at the NC Zoo. It's tempting to rush out to the zoo and get a glimpse of the youngsters, but for the best chance to view them, it's probably a good idea to plan your welcome visit for the spring. All the best to Dyson and Storm in their new home.

In other fantastic news, Season Four of The Ravens Crossing started last week with a whole new group of main characters. Stories will post three days a week this season with Andi Lea's Wildwood Knights on Mondays, West Thornhill's Wildwood Dreams on Wednesdays, and me on Fridays. Without giving too much away, my Wildwood Tides story centers around a Wild Animal Park. So, drop round for some new adult fiction fun.
Posted by Zooleft at 3:56 PM No comments:

The Owl and the Pussycat, Strange Bedfellows

Apparently, Fum and Gebra have their own website. Look them up. My mother passed along the following video to me. I had to share it. Enjoy!

Oscar Has a Plus One 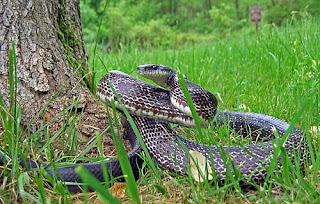 My family has a habit of calling every black rat snake they run across on our farm, be it in our garage, the attic, or the backyard by the name of Oscar. The original Oscar was named by my uncle after he got done screaming like a teenager at a One Direction concert, that is. The snake had crawled over the door frame that led from the garage to the house and wigged my uncle slam out. He had to be convinced that there were very good reasons to keep said black rat snake around. That took some doing, let me tell you.

Less mice and rats and general pest species that carry all manner of diseases around the house was one of the selling points. But, I'm fairly sure that knowing the black rat snake would establish a territory and thereby keep the other more venomous relatives away was probably the thing that finally convinced the uncle to leave Oscar alone. Well, that and bestowing upon him a name. That seemed to give the guy personality and suddenly the uncle was no longer so keen on killing him.

Over the years, the whole family has gotten used to "Oscar" and they often now come running, but rather than to scream and ask me to get rid of it, they are more interested in pointimg "him" out so I can see him whenever they run across him. I have kept it pretty close to the vest that there was probably more than one Oscar around judging by the variation in size and markings on the snakes they were finding. So far, that has been my little secret. At least until today. 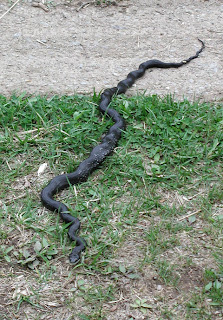 This morning, my mother came rushing in from the yard to tell me Oscar had been spotted breakfasting in the rose garden. "Come quick and see." Sure enough, there Oscar was, all lumpy and obviously well fed. But, here's the clincher. While we were standing there watching him, Oscar's plus one decided to make an appearance and crawled right across the yard beside us. So much for stealth.

The mother wanted to know what this meant for her birds, and we had to have the whole snake has to eat conversation. But, otherwise she didn't seem too upset by the news. I am stoked that Oscar has a "girlfriend" and various other family members around. Others might not be so pleased. Since the cat's already out of the bag, fair warning Uncle. You might want to break out the girly voice and get it ready for the next run in. Luckily for Oscar and his friends, they can't hear you screaming. So go ahead and do your worst. It's all good.
Posted by Zooleft at 5:15 PM No comments:

This year, Ellen's Mother's Day show had an audience filled with expectant mothers and her opening monologue was right up my alley, since it was all about animal mothers from around the world. In case you missed it, I thought I'd share. Happy Mother's Day, everyone.

Posted by Zooleft at 9:57 AM No comments:

The Cinco in Mayo Stands for Five Reasons to Love Your Dog! 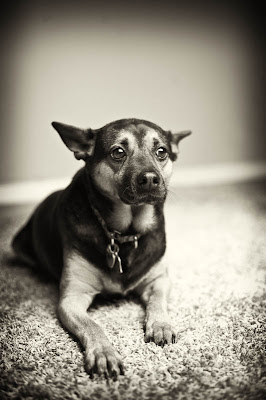 Anyone who knows me knows that I found my little dog on this fateful day twelve years ago and named her Cinco de Mayo. It was fitting, not only because of the date, but because I grew up in Morelia, Mexico, and though I realize the holiday is more an American thing, still, it seemed like a name that suited us both.

Her puppy years were a bit rough, since she had been abused even in her short existence before I found her, so she suffers from a smidge of separation anxiety. I admit there were years where I said the Cinco stood for five reasons never to own a dog. But, she has become my best friend and faithful companion, and looking back I wouldn't change a thing.

Last year I told the story of finding her over on my other blog. You can read that here. I've blogged about Miss Cinco a lot, in fact. Check out her doggy diva days as a local celebrity here. Or, how about the time she helped the firemen promote the new Forest Fire Station. She gets around.

Anyway, all this is really just to say, Happy Cinco de Mayo to you all, and most of all, Happy Birthday, fabulous Cinco. I love you, my little nugget. Yes, I realize she can't read this, but it's nice to put it out there, anyway.
Posted by Zooleft at 6:54 PM No comments:

Zooleft
Amanda Sandos is not just some crazy liberal environmentalist, although she did leave the zoo industry after eighteen years as a zookeeper to become a freelance environmental artist. Hmmm. She is a master's graduate of Goddard College and the sole proprietor of a pet-sitting service in her area. She has a studio at Art on 12th in Lynchburg, where she sells her paintings, photography, and hand-made jewelry. She is also a freelance writer, who has published creative non-fiction, environmental writing, poetry, and fiction.